Greece, Oil and Europe: A Recipe for a Messy Ending?

The short answer is probably not. But please don’t let this stop you reading on, because as usual the reality is likely to be far less straightforward.

Over the last few weeks the price of oil has fallen significantly and for most of us that seems like a very good thing indeed. Falling prices are just what most consumers (you and I) are hoping for because that way we can get more ‘stuff’ and our money lasts that little bit longer. As we are constantly being reminded, “every little helps”. But does it really?

Deflation is the biggest threat

Europe is about to experience the delights of deflation. Falling prices mean consumers stop spending in the hope that next week, next month or even next year, they will be able to buy the things they want more cheaply, leading to falling demand for goods and some services. Lower demand means lower prices, as companies seek to encourage people to start buying again. Deflation is bad for companies and bad for their employees. Inflation is far less problematic as it is a sign of growth and success, based on demand for the goods and services they provide. Deflation means no growth and a significant risk of individual hardship as profit margins fall, ultimately threatening jobs, companies and whole economies.

Economists and central bankers also fear deflation far more than inflation. Inflation can be controlled, by increasing interest rates. There is no theoretical limit to increasing interest rates. In most cases, reducing interest rates can be relied upon to drive up inflation, as people are more able to spend more by accessing cheap credit which fuels consumer debt. But in Europe, like the USA and the UK, interest rates are already at an all time low, so there is little room for manoeuvre. In the UK and the USA the balance between inflation and deflation is apparently under control, although that could change if Europe fails to reverse the current deflation it faces. Contagion is not impossible.

The Swiss recently introduced negative interest rates on large Swiss Franc denominated bank accounts with balances of more than CHF10m, entirely to prevent Russian money from flooding their economy and devaluing their currency. That is not what is happening to the Euro.

In Europe, interest rates have turned negative as a last ditch attempt to fight deflation and avoid further quantitative easing, solely because there is no option as rates are already so low, the only way is negative. That is precisely why the markets have reacted the way they have to the threat of deflation in Europe.

Apparently with no meaningful solution easily to hand the global markets, led by the Europeans have spent most of December in a downward spiral, losing around 8{a1d5745a86653f095ed3386d3dbf7deff8ff78eb8b3be67133b744f07a6e4072} over the month. Then in January the ECB (European Central Bank) began to soften to the idea that it should engage in further quantitative easing.

This will have the effect of introducing new money into the Eurozone, which they hope will boost demand and lead to growth and an end to deflation.

Is Europe going the way of Japan and is that bad for markets?

Japan has spent the last twenty years in a deflationary slump from which it has been trying hard to escape. Despite this, money has been made on the Japanese stock markets, assuming you were lucky enough to know when to buy and when to sell.

Most people did not have this knowledge but regardless, the Japanese markets have had their moments: 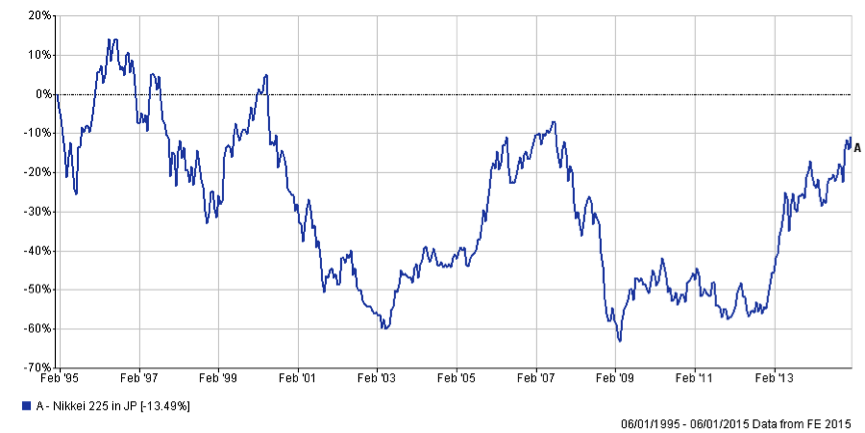 And whilst this twenty year view of the Nikkei is overall a downward picture, along the way there have been significant falls and rises that could have lost and made investors money. Between 2003 and 2007 markets rose there by more than 120{a1d5745a86653f095ed3386d3dbf7deff8ff78eb8b3be67133b744f07a6e4072}. The same thing happened between 2009 and today. What is very clear is that a buy and hold strategy would not have worked for most investors.

The question is, will a deflated Europe be any different?

My view is that probably it will be. All markets trade on earnings expectations. Since 2009, central bankers have become surprisingly adept at managing the consequences of the Banking Crisis, which is still very much at the heart of what we are experiencing today. Even the European Central Bank has managed to deal with a series of consequential crises and so far so good. The markets, that you and I rely upon for our future financial wellbeing, have become increasing willing to trust central bank interventions globally and have moved both up and down as a direct consequence of the announcements, pronouncements and actions of central banks.

So as the Eurozone droped into the shark infested, oil polluted waters of deflation, share markets reacted greedily to the news that the European Central Bank will soon begin the task of re-inflating the Eurozone by pumping new Euros into the European Financial system.

Now, just to be absolutely clear, it is not that the ECB has never engaged in this activity. It has and to a certain extent it worked but compared with the Bank of England and the US Federal Reserve, the ECB it has been extremely measured in its response, possibly in the hope that other factors would conspire to stimulate economic growth. For the most part European QE has been targeted solely at rebuilding the balance sheets of the European Banks who have been the slowest in the world to come clean about their post crisis losses.

Too little money chasing too many goods

This has led to a dwindling European money supply, which in plain speak means that there is too little money in circulation and not enough for people to spend in the shops. It is for this reason that Europe finds itself with deflation. Is this a consequence of too much austerity? Possibly.

We need to understand what it means for markets.

Many commentators, some of them very well respected, are worried that we are about to become embroiled in a large market crash, brought about by over inflated company valuations and the prospect of corporate earnings drying up as a consequence of European deflation leaking out into the rest of the global economy. It is true that the European markets are very significant to the rest of the world but action by the ECB now to re-inflate the Eurozone is likely to resolve the problem, but that needs to be timely, decisive and long term.

And then there’s Greece.

The prospect of a Greek exit from the Euro was a serious concern three years ago Today, whilst undesirable for all parties involved, it may simply be inevitable. The difference between now and then is that then countries such as Italy, Spain Portugal and even Belgium were teetering on the brink of similar catastrophes, whereas today they are in far better shape with the backing of a European Central Bank seemingly willing to do what it takes to hold the Eurozone together.

That is not to say it will succeed. The ECB is the most political of the big central banks and struggles with the most diverse political economy in the world, which could be a reason why its QE programme has been comparatively weak until now. No one can say for sure what the outcome will be but controlling the money supply is the key to this and the reaction of markets to central bank activities has so far been positive.

Warning: Investment returns are not guaranteed. The value of investments and their associated income can fall as well as rise. Past performance is not a guide to future returns. This report represents the views of the author and does not constitute investment advice and no action should be taken as a result of its contents.