Since April 2015 the ‘Share Bear’ has been knocking on the door.

A ‘Bear’ in Stock Market terms is the downward trending of share prices. People who are referred to as ‘Bears’ in this context are pessimistic about the outlook for share prices and think that in general prices will be falling. Technically speaking, a Bear Market or Bear Territory as it is sometime called, is where the price of shares has fallen below -20{a1d5745a86653f095ed3386d3dbf7deff8ff78eb8b3be67133b744f07a6e4072} from it’s most recent high. 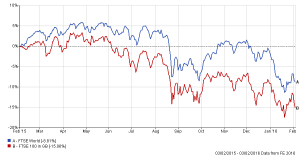 -20{a1d5745a86653f095ed3386d3dbf7deff8ff78eb8b3be67133b744f07a6e4072}  was an important limit which I set as a possible trigger for a return to investment when discussing this with clients who are sitting on large amounts of cash last year. At that time I felt that a fall into Bear territory would signify a sensible time to invest that cash. That analysis was based on the fall being fuelled by worse than hoped for profit margins resulting in a loss of confidence in corporate earning on the part of investors. It was also based on the fall being more global in nature and focused more on the S&P500.

In the event, the fall during Christmas and the New Year that took us into Bear territory was largely the result of oil price volatility with the price of barrel of oil falling below $30 and disappointing economic news from China. Only now are profit warnings hitting the news and then only in the financial press. So whilst the share markets have recovered a little from their recent lows, it seems very likely that this is not the end of the matter and worse may still be to come.

Talking Up The Market

So, why would I say this when almost every other analyst and market commentator is saying that the that the global economy, mainly the developed economies and in particular the U.S. and the U.K. are showing such positive signs of recovery and China, whist falling from previous production heights, remains a positive force. Cynically, I think many are talking up the market.

We base day to day share prices on supply and demand. Supply is first determined by the companies in whose name the shares are issued and then later, those who own the shares determine supply by selling their shares (or holding on to them) on the open market through recognised stock exchanges. Demand is determined by investors’ desire to hold shares, based almost exclusively on their view of future prospects partly for corporate earnings growth. If earnings are growing, then share prices are likely to rise. If earnings are declining then share prices should fall.

What Goes Up Must Come Down

In a previous Keynotes I drew on research carried out by James Montier of GMO, one of the World’s largest asset managers. In March 2012 he published a GMO White Paper, “What Goes Up Must Come Down”, in which he showed US corporate profits (earnings) rising apparently unsustainably and he extended this view to many other economies. He forecast a change in this that would result in a different valuation for shares. It seems that he was four years ahead of the curve. Ernst & Young issued a report this week that said 100 companies listed on the LSE (London Stock Exchange) have issued profit warnings in the last quarter of 2015, the highest number since the crisis  in 2009. Apple have announced that iPhone sales are likely to fall as demand from China falls, the first time this has happened in the company’s history. Oil and China dominate the current market situation but the key to it all is profit expectations.

So, What Should We Be Doing?

As always, each individual portfolio is different and you should take advice separately before taking any action. This article is generic and not intended as specific investment advice. Whilst further falls in share values are not guaranteed and those of us with diversified portfolios, employing bonds, shares and other financial instruments will be partly protected from such falls, it is not yet time to commit our cash to these markets, except perhaps for the very cautious, who are more bond than share focused. For them the questions of interest rates is more key. For share investors, the time to commit will arrive only when those around us are truly startled and panicked by what is happening. For now cash remains king, albeit a poor monarch and diversity should rule the rest of our investment empires.

If you have any questions about my views or require specific advice for your portfolio then please do get in touch.

It is important to understand that this report is not intended as specific investment advice, only my opinion in broad generic terms, designed to provide a flavour of the markets and possible future outcomes based on the possible evidence at our disposal.

The value of investments can fall as well as rise and they are not guaranteed. Past performance is not a guide to future returns and you may get back less than you have invested.

If you are at all concerned about your specific situation and the investments you hold and you are not due a review soon, then you should contact us as a matter of urgency and we will review your attitude to risk and your portfolio to ensure it meets your requirement.